The exhibit Imagining the Museum at the Museum of Science and Industry (M.S.I.), which opened in May, debuts seventy never-before-seen concept drawings and 3D models that illustrate how the M.S.I. and its exhibits have evolved over its eighty-four-year history.  Imagining the Museum includes the original plans for some of the M.S.I.’s most popular exhibits, such as the Coal Mine, the M.S.I.’s first large-scale exhibit; Science Storms, which features the world’s only forty-foot swirling vortex; and The Great Train Story, which is home to over 190 miniature buildings custom-built for the exhibit.

“We’re excited to bring these incredible works out from the archives as they tell an integral part of the Museum of Science and Industry’s story,” said Kathleen McCarthy, Director of Collections and Head Curator.[1]  “The Museum has always celebrated creativity and innovation, and we believe that guests will really enjoy seeing this behind-the-scenes process of how the Museum has continually evolved, and exploring the cutting-edge technologies displayed over the past 84 years.”

The concepts detailed in Imagining the Museum, located in the Rita and John Canning Galleries on the Museum’s Lower Court, date back to the beginning of the M.S.I.’s history, from the first exhibit ideas to the permanent exhibits currently open at the M.S.I., including multiple original illustrations of the Coal Mine that show the early plans of its construction and design methods that are still in use today.   Concept sketches from the 1950s depict a large-scale spaceship to celebrate the 100th anniversary of American civil engineering.

A miniature 3D model of The Great Train Story used by engineers to aid in the construction of the actual exhibit, which follows the journey from Chicago to Seattle along 1,400 feet of railroad track.  The M.S.I. stated, “Additional drawings also show how the initial plans mapped the trip from Chicago to Los Angeles before changing the final destination to Seattle because the display would have been too large to fit in the exhibit space.  Vibrant renderings of the Museum’s iconic permanent exhibit, Science Storms, that depict how ideas for an exhibition take shape, evolve and ultimately come to life.”

Imagining the Museum will be open through the spring of 2018.  It is included with Museum Entry (general admission), which is $18 for adults and $11 for children ages three-to-eleven.

The Museum of Science and Industry is located in the northeast corner of Jackson Park in the neighborhood of Hyde Park on the South Side of Chicago.  The address is 5700 South Lake Shore Drive, Chicago, Illinois 60637.

Figure 3 Photo Credit: J.B. Spector Caption: This is a rendering of The New U-505 Experience, which can be seen in the Museum of Science and Industry exhibit Imagining the Museum.

Figure 4 Credit: J.B. Spector, Museum of Science and Industry Caption: This is the U-505 relocated underground in the actual exhibit The New U-505 Experience, which opened in 2005. 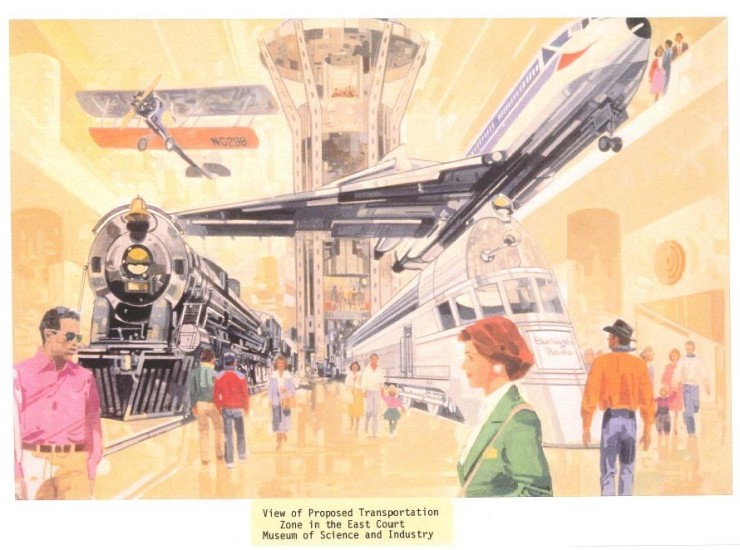 Figure 5 Photo Credit: J.B. Spector, Museum of Science and Industry Caption: This is a rendering of the proposed Transportation Zone in the East Court of the Central Pavilion of the Museum of Science and Industry.  The rendering can be currently seen in the exhibit Imagining the Museum.  Note that as built the Burlington Zephyr is actually between the two wings of the underground garage and is accessible from the Entry Hall.  The Great Train Story sits where the Burlington Zephyr can be seen in this rendering.  Also, the Air Traffic Control Tower seen here was not built.

2 thoughts on ““Exhibit ‘Imagining the Museum’ at the Museum of Science and Industry” by S.M. O’Connor”