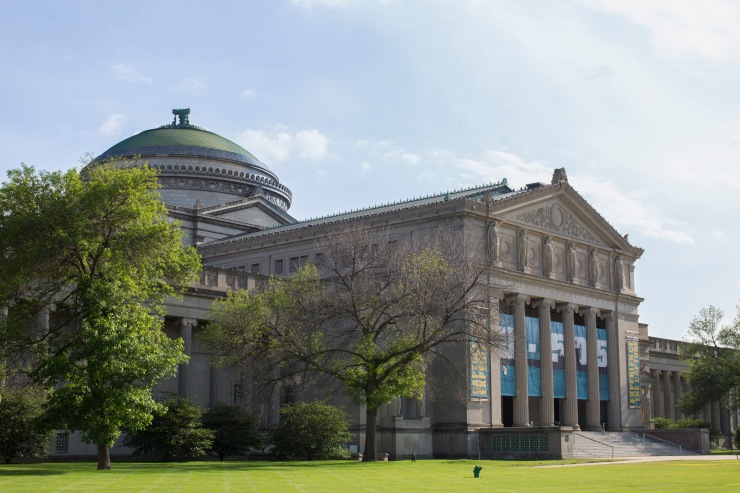 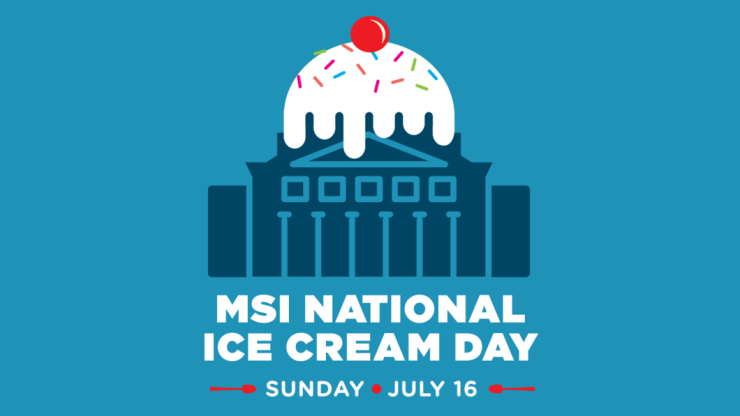 The ice cream will be served at each stop for one hour for free on a first-come, first-served basis until the hour ends or the ice cream runs out.  An M.S.I. spokeswoman wrote, “Each stop will feature a custom ice cream flavor and guests will receive a FREE cup of liquid nitrogen-crafted ice cream while supplies last.  Chef Graham Elliot will also be a special guest at the MSI stop, sharing a customer flavor specially created for the Museum.”

The day’s schedule is subject to change.  Hey Batter, Batter (chocolate cake batter-flavored ice cream) will be served at Guaranteed Rate Field, Gate 5, from 1:30 a.m. to 12:30 p.m. Note it will be White Sox Family Sunday.

Sweet Corn-ell Drive (sweet corn-flavored ice cream) will be served at M.S.I. for the event “Smart Park with Chef Graham Elliot.”  Mr. Elliot will be debuting a flavor of ice cream he created for the Museum of Science and Industry.

Museum Entry (general admission) tickets are required at the M.S.I. stop.  Those tickets are $18 for adults and $11 for children ages three-to-eleven.  Tickets are not required to receive free ice cream at the Guaranteed Rate Field and Maggie Daley Park stops.

The Bean (vanilla bean-flavored ice cream) will be served at Maggie Daley Park from 4:00 p.m. to 5:00 p.m.  The M.S.I. invites journalists to visit any of the stops.  Parents of children with nut allergies should be aware that although the ice cream is being made fresh, the materials and equipment may have had contact with peanuts and other tree nuts in the past.

Nitro Dessert Station stated, “Nitrogen is a common element found in the air we breathe.  When it’s cooled to -321°F, it becomes a liquid.  As soon as the super-cooled liquid is introduced to the room temperature air, it immediately starts to turn back into a gas leaving a cool white fog behind.  Instead of handling the liquid nitrogen directly, our station is self-controlled.  Ours is the only patented process for dispensing liquid nitrogen with a cryogenic vacuum hose into an open container – a safer, more controlled process.  Liquid nitrogen doesn’t add any flavor to the ice cream or sorbet that we make – it’s actually a technique to flash-freeze the ice cream.  The liquid nitrogen is a cooling agent – not a food additive.  Commercially made ice cream is mostly air and large ice crystals.  Since liquid nitrogen is so cold, the mixture is flash-frozen leaving smaller and fewer ice crystals, which means a richer and creamier product.  We use a stand mixer to ensure that our product remains consistent throughout your event.  Our ice cream looks and tastes like regular ice cream – only better.”

The Museum of Science and Industry is housed in the Palace of Fine Arts from Chicago’s first World’s Fair, the World’s Columbian Exposition (1893).  Unlike other exhibition halls built for the World’s Columbian Exposition, which were railroad sheds with plaster façades, the Palace of Fine Arts had a brick substructure.  It was designed by Charles Atwood (1849-1895), who was Chief Architect of the World’s Columbian Exposition.  After the World’s Columbian Exposition, it housed the Columbian Field Museum, which moved – as The Field Museum of Natural History – to new quarters in Burnham Park in 1920.  Sculptor Lorado Taft (1860-1936) persuaded the South Park Commission (which later merged with Chicago’s other park districts to form the Chicago Park District) not to demolish the P.F.A. (because its plaster façade had fallen into disrepair).   Voters approved a $5,000,000 bond issue to repair the building and convert it into a mixed-use facility with two museums.  Julius Rosenwald (1862-1932), President of Sears, Roebuck & Company, talked to his fellow members of The Commercial Club of Chicago about founding a science museum modeled on the Deutsches Museum von Meisterwerken der Naturwissenschaft und Technik (German Museum of Masterworks of Science and Technology) in Munich, Bavaria.  He galvanized them by pledging $3,000,000 to endow the Museum of Science and Industry. In 1926, the Museum Association incorporated as the Rosenwald Industrial Museum, but Julius Rosenwald persuaded them to drop his name. Three years later, the Museum Corporation officially changed its name to the Museum of Science and Industry.  Design of the restoration and reconstruction of Atwood’s staff superstructure and brick substructure fell to Graham, Anderson, Probst, and White – principally to Alfred Shaw (1895-1970).  He also designed the Art Moderne interior.  [After Probst and White died, he co-founded Shaw, Naess, and Murphy while on the project.[1]]   Shaw also designed Chicago’s Merchandise Mart, Civic Opera House, the Morton wing of The Art Institute of Chicago, the original McCormick Place, the Continental Plaza Hotel, and a number of high-rise apartment buildings along North Lake Shore Drive.  The M.S.I. opened in three stages between 1933 and 1940.  It opened to the public for the first time on July 1, 1933, which coincided with Chicago’s second World’s Fair, A Century of Progress (1933-34).

Charles Comiskey (1859-1931), the original owner of the Chicago White Sox, built Old Comiskey Park in Bridgeport.  Designed by Zachary Taylor Davis (1869-1946), who also designed Wrigley Field, Mount Carmel High School, and the St. James Chapel of Archbishop Quigley Preparatory Seminary, it hosted the Chicago White Sox from 1910 to 1990.  It was demolished in 1991 after New Comiskey Park was built across the street in Armour Square.  The new ballpark is owned by the Illinois Sports Facilities Authority and operated by the White Sox, an American League team.  In 2003, U.S. Cellular purchased name rights to the stadium for twenty years for the sum of $68,000,000.  Sprint announced in 2013 it would not seek to change the name of the stadium to Sprint Field after it purchased the U.S. Cellular market in the Chicago area.  In August of 2016, the White Sox announced that Guaranteed Rate, Inc., which is a Chicago-based residential mortgage company, had purchased naming rights for a period of thirteen years.  The new name went into effect on November 1, 2016.

Maggie Daley Park is east of Millennium Park and north of Grant Park.  It is bounded by Randolph Street to the north, Lake Shore Drive to the east, Monroe Street to the south, and Columbus Drive to the west.  Designed by landscape architect Michael Van Valkenburgh, the park, which opened in 2014, was named after Margaret (“Maggie”) Corbett Daley (1943-2011), the wife of Mayor Richard M. Daley (Daley the Younger).  The Chicago Park District built Maggie Daley Park to replace Richard J. Daley Bicentennial Plaza, which was named after her father-in-law, Mayor Richard J. Daley (1902-1976) (Daley the Elder).  Back in the 1970s, the Chicago Park District had replaced a parking lot at the north end of Grant Park with a 3,700-car underground garage with Richard J. Daley Bicentennial Plaza atop at the ground level.  It included a fieldhouse, an ice skating rink, and the first playground in Grant Park.  Maggie Daley Park features the Bloch Cancer Survivors’ Garden, the Skating Ribbon, a climbing wall, the Play Garden, a fieldhouse, tennis courts, picnic groves, and an eighteen-hole mini golf course.  The Bloch Cancer Survivors’ Garden is a holdover from Richard J. Daley Bicentennial Plaza that opened in 1996.  Although it has a separate identity from Grant Park, technically speaking Maggie Daley Park represents the northeastern corner of Grant Park.

[1] In 1947, he founded Shaw, Metz, and Associates with Carl A. Metz.  In 1966, his partnership with Metz dissolved and he founded Alfred Shaw & Associates, of which he was president until his death four years later.

In addition to the four figures Henry Hering (1874-1949) made for the corners of Stanley Field Hall, he also made the twelve plaster round lion head shield escutcheons that line it. These are replicas of the marble round lion head shield escutcheon he made for the pediment of the facade of The Field Museum of Natural History.
Follow In the Garden City on WordPress.com
Join 844 other subscribers