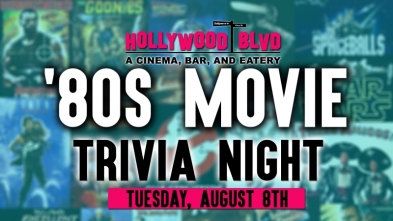 Hollywood Blvd. Cinema has five remaining Movie Trivia Nights this year, each with its own theme.  The first one is “80s Movie Trivia” is on Tuesday, August 8, 2017.  The event begins at 7:00 p.m.  Tickets are $3 and benefit Variety Children’s Charity of Illinois.  One can purchase tickets online here.

Carmelo Chimera of Chimera’s Comics will host.  Teams answer forty trivia questions.  Each team needs to consist of four-to-six people and must have a name.  If a film buff comes without a team, Carmelo will assign him (or her) to an existing team.  The top three teams win movie swag, movie passes, and other prizes.

Professional wrestler, traceur (practitioner of parkour), and actor John Hennigan, known in W.W.E. as John Morrison and Johnny Nitro, will appear at Hollywood Blvd. Cinema to promote his film Boone: The Bounty Hunter (2017) from 10:30 a.m. to 1:00 p.m. on Sunday, August 13, 2017.  Hennigan has wrestled for the World Wrestling Federation (W.W.F)/World Wrestling Entertainment (W.W.E.), on the independent circuit, Lucha Underground, and Lucha Libre AAA Worldwide.  For the WWE, he was an ECW World Heavyweight Champion, a three-time WWE Intercontinental Champion, and was part of teams who won the WWE World Tag Team Championship and WWE Tag Team Championship.  He was also a former Lucha Underground Triple Crown Champion.   Currently, he is the AAA Mega Champion, AAA Latin American Champion, and the AAA World Cruiserweight Champion under the name Johnny Mundo.  As an actor, he has appeared for Weird Al’s Broadway Style Cabaret Review.  He starred as Hercules in Hercules Reborn (2014).  Hennigan had supporting roles in Season 7 of the Showtime series Shameless, Season 6 of the Freeform (formerly ABC Family) series Baby Daddy (2012-2017), and the first two episodes of the new Netflix series GLOW.  Hennigan co-writer, producer, and star of Boone: The Bounty Hunter.  Next year, he will appear in Minutes to Midnight (2018).  There will be a live Q&A before the screening of Boone: The Bounty Hunter.  Prior to the screening, there will be photograph and autograph opportunities in the lobby, as well.  One can purchase tickets online here.

Actress and producer Diane Franklin will appear at Hollywood Blvd. Cinema on Saturday, August 26, 2017, from 3:00 p.m. to 7:00 p.m.  Best known as the French exchange student Monique Junot in the hilarious, surreal high school comedy Better Off Dead (1985) and as Princess Joanna in Bill & Ted’s Excellent Adventure (1989), she has thirty-seven film and television credits.  She is married to screenwriter Ray De Laurentis, with whom she has two children: Olivia and Nicholas.  Ms. Franklin (or Mrs. De Laurentis) has written two memoirs: Diane Franklin: The Excellent Adventures of the Last American, French Exchange-Babe of the 80s, published in 2012, and Diane Franklin: The Excellent Curls of the Last American, French Exchange Babe of the 80s (Volume 2), published in 2017. She will be available for photographs, autographs, and a live Q&A for a screening of Better Off Dead.  One can purchase tickets online here.

Over fifteen brewers will be presenting their beers and ciders at the BREWS ON BLVD event is on September 16, 2017 from 11:00 a.m. to 1:30 p.m.  Beer, cinder, and appetizers will be available along the length of Hollywood Blvd. Cinema’s “boulevard,” the long hallway off of which the auditorium theaters, washrooms, and kitchen branch.  Beer-themed entertainment will be on the screens in the auditorium theaters throughout the event.  The event will culminate at 2:00 p.m. with the screening of Beerfest (2006). One must be a legal adult (age twenty-one or over) to attend.  Early bird tickets were $40 until yesterday, Thursday, July 20, 2017 and are now $50.  The event sold out last year.  A ticket covers “beer themed entertainment” being screened on four or more screens; beer and cider tastings from over fifteen brewers; a commemorative glass and brew guide; appetizers; and a voucher for the screening of Beerfest.  This is Hollywood Blvd. Cinema’s 3rd Annual Craft Beer Festival.

The address of Hollywood Blvd. Cinema is 1001 75th Street, Woodridge, Illinois 60517.  It is located in the Woodgrove Festival shopping mall at the southwest corner of the intersection of 75th Street and Lemont Road.  The phone number is (630) 427-1880.

[1] Of course, every fan of Agatha Christie’s first and greatest detective, Hercule Poirot, must watch Agatha Christie’s Poirot (1989-2013), which starred David Suchet.  The series producers saved the adaptation of Murder on the Orient Express for the twelfth (second-to-last) season, which aired in 2010.

In addition to the four figures Henry Hering (1874-1949) made for the corners of Stanley Field Hall, he also made the twelve plaster round lion head shield escutcheons that line it. These are replicas of the marble round lion head shield escutcheon he made for the pediment of the facade of The Field Museum of Natural History.
Follow In the Garden City on WordPress.com
Join 844 other subscribers