Saturday, January 13, 2018 is Frito-Lay Free Day at the Museum of Science and Industry in Hyde Park on the South Side of Chicago.  Free Museum Entry (general admission) tickets and special activities are courtesy of the Family Edition of Frito-Lay’s Dreamvention Contest.  Note that special exhibits like Brick-by-Brick and Robot Revolution, movies in the Giant Dome Theater, an on-board tour the U-505, Coal Mine tours, and the WOW! Tour of the Museum of Science and Industry (M.S.I.) require separate timed tickets that cost $12 per adult or $9 per child.  There will also be a free day on Wednesday, December 13, 2018 at the New York Hall of Science in New York City.

For a chance to win $250,000 in the Family Edition of the Dreamvention Contest, take these four steps.  Firstly, go to the Website www.mydreamvention.com/home.  Secondly, dream up an invention with one’s (a) family, or (b) group of friends, or (c) classmates, or (d) team.  Thirdly, draw it with the Website’s tool or draw it with one’s own tool.  If one has a photograph, it should be in .jpg or .png format and not exceed 10MB.  Fourthly, upload it by Monday, February 26, 2018.  A household can submit up to five Dreamventions.  In order to qualify, an invention cannot have already won awards and the inventor cannot be in the process of receiving a patent for it.  Five finalists will be announced in October of 2018.  If one has questions, one should call Frito-Lay Customer Service at 1-800-352-4477.

To get 25% off a Lyft ride to M.S.I. for Frito-Lay Free Day, click on this link to get the code.  There is a maximum savings of $5 per ride.

The M.S.I. opened within the Palace of Fine Arts in three stages between 1933 and 1940, as construction work was completed and exhibits were installed.  The Palace of Fine Arts is the last exhibit building from the White City at the heart of Chicago’s first World’s Fair, the World’s Columbian Exposition (1893) to remain standing in Jackson Park.  The first opening ceremony of M.S.I. occurred during the first year of Chicago’s second World’s Fair, A Century of Progress International Exposition (1933-34).

The Museum of Science and Industry stands at the north end of Jackson Park, along 57th Street, between Lake Shore Drive to the East and Cornell Drive to the West.  Jackson Park is in the neighborhood of Hyde Park on the South Side of Chicago.  The University of Chicago campus is west of the Museum of Science and Industry on 57th Street.  The M.S.I. is open every day except Thanksgiving Day and Christmas Day.  Most days, it is open from 9:30 a.m. to 4:00 p.m., but during peak periods it has extended hours (until 5:30 p.m.).  The address is 5700 South Lake Shore Drive, Chicago, Illinois 60637.  The Website is https://www.msichicago.org and the phone number is (773) 684-1414. 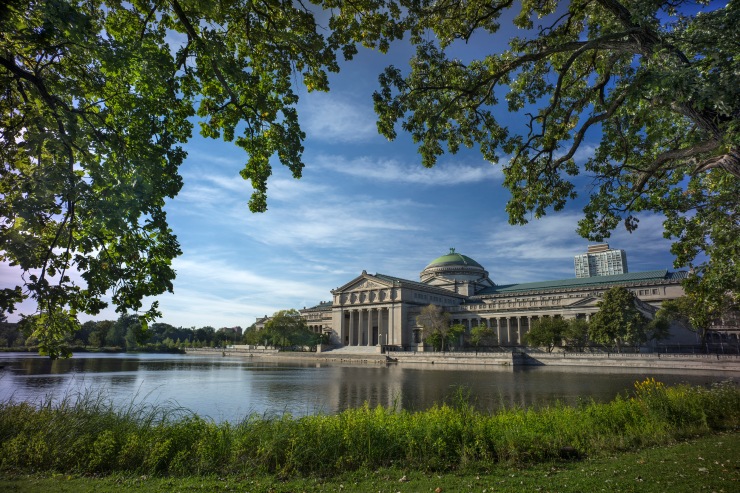