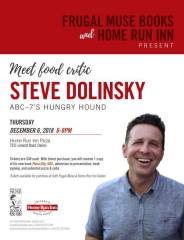 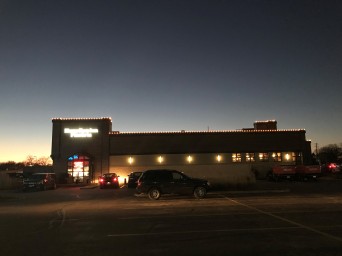 Frugal Muse Books, Music & Movies (also known as Frugal Muse Books Music & Video) is inviting bibliophiles, pizza-lovers, and Chicago foodies to a Pizza Party & Book Signing.  Join thirteen-time James Beard Award-winning food reporter Steve Dolinsky (a.k.a. The Hungry Hound on A.B.C.-7 News) for a pizza party, discussion, and book-signing of his debut book, Pizza City, USA: 101 Reasons Why Chicago is America’s Greatest Pizza Town at the Home Run Inn Darien location on Thursday, December 6, 2018 from 6:00 p.m. to 8:00 p.m.  Northwestern University Press published the book with a release date of September 15, 2018.  His Hungry Hound reports air on A.B.C.-7 during the 11:00 a.m. news broadcasts on Fridays and the 10:00 p.m. broadcasts on Saturdays.  Mr. Dolinsky co-created The Feed Podcast with Rick Bayless, the Chef and Owner of Frontera Grill, Topolobampo, Xoco, and Leña Brava, as well as Host of Mexico: One Plate at a Time on P.B.S.  Their podcast earned the James Beard Award in 2015 for best podcast.  He also writes occasionally for the travel sections of the Chicago Tribune and The Globe and Mail national newspaper up in Canada.

Home Run Inn Pizza Darien is in Chestnut Court mall like Frugal Muse, at the southeast corner of 75th Street and Lemont Road, in Darien at the border with Woodridge.  Like the Chase Bank branch tower, Home Runn Inn is in an out lot of the mall, which is shaped like a backwards capital L, while Frugal Muse is in the wing that faces Lemont Road.  [Woodgrove Festival mall, which is home to Hollywood Blvd. Cinema, is across the street.]  The address of the Home Run Inn Darien is 7521 Lemont Road, Darien, Illinois 60561.  The phone number is (630) 739-9696.