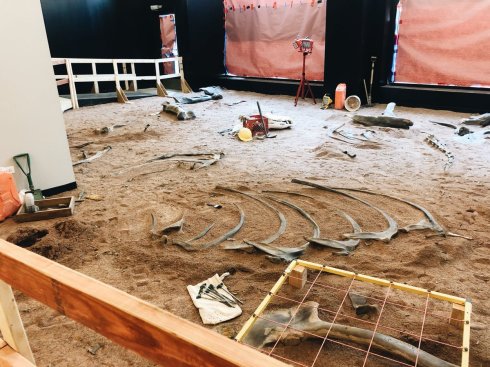 The Field Museum of Natural History’s Dig Site (temporary paleontological dig site simulation) is inside a storefront at 333 North Michigan Avenue (the Art Deco building at the intersection of Michigan Avenue and Wacker Drive on the Magnificent Mile of Michigan Avenue).  This is free and is open for a limited time through Sunday, June 30, 2019.  The hours are 11:00 a.m. to 6:00 p.m. on Sundays and from 11:00 a.m. to 7:00 p.m. Mondays through Saturdays.

This is a chance to examine a simulation of a paleontological dig site, take a picture of an eight-foot-long femur of the largest dinosaur, and learn about how paleontologists unearth the remains of creatures from the Cretaceous period, discover previously unknown creatures, help protect rainforests, etc.

The pop-up opened on Monday, April 1, 2019.  Thus, The Field Museum made the announcement as a practical joke on April Fools’ Daywith a tweet and an e-mail as if paleontologists in the employ of The Field Museum had actually discovered dinosaur fossils in the foundation of a building on the Magnificent Mile.

The new SUE gallery in Griffin Halls of Evolving Planet (formerly the movie theater in Evolving Planet) opened on Friday, December 21, 2018.  SUE is the most complete Tyrannosaurus rex skeleton yet recovered.  Her mounted bones went on display in Stanley Field Hall of The Field Museum on May 17, 2000.[1]  More than 10,000 people visited The Field Museum that day.  In one of the largest private gifts ever to a Chicago museum, the Tyrannosaurus rex SUE was remounted in a more scientifically accurate way and moved upstairs from Stanley Field Hall to the exhibit The Griffin Halls of Evolving Planet, as I wrote about in 2017.  Meanwhile, a touchable cast of the biggest dinosaur yet discovered, Patagotitan mayorum, was installed in Stanley Field Hall, as part of The Field Museum’s 125th anniversary celebrations in 2018, thanks to a $16,500,000 gift from the Kenneth C. Griffin Charitable Trust.  This titanosaur cast, which stretches across 122 feet of Stanley Field Hall, has been dubbed Máximo.  The move of SUE upstairs and the installation of Máximo are part of the Griffin Dinosaur Experience.  Last year, The Field Museum announced the $250,000,000 fundraising campaign “Because Earth. The Campaign for the Field Museum.”

The Field Museum has over 30,000,000 artifacts and specimens.  Over 150 scientists, conservators, and collections staff members work there.