Thursday, May 2, 2019 is the next free day for residents across Illinois (not just the city of Chicago) at The Field Museum of Natural History.  Basic Admission (general admission) is free for Illinois residents with proof of residency.  This includes the exhibits Evolving Planet, The Ancient Americas, and Inside Ancient Egypt.

This is a good opportunity to see special ticketed exhibits and/or 3D movies for museum visitors who would otherwise find it unaffordable to purchase Basic Admission tickets and then purchase an All-Access Pass or Discovery Pass.  A discounted All-Access Pass covers all general admission exhibits, all ticketed exhibits, and one 3D movie.  For adults, its $23; for children (ages three-to-eleven), its $17; for senior citizens (ages sixty-five-and-over), its $20; and for students, its $20.  [Students must present an identification card.]  A discounted Discovery Pass includes general admission exhibits, and one ticketed exhibit or one 3D movie.  For adults, its $16; for children, its $12; for senior citizens, its $14; and for students, its $14.

The Field Museum is celebrating the 125th anniversary of its foundation.  Open 364 days a year (every day but Christmas Day) from 9:00 a.m. to 5:00 p.m., the last admission time is 4:00 p.m.  The new SUE gallery in Griffin Halls of Evolving Planet (formerly the movie theater in Evolving Planet) opened on Friday, December 21, 2018.  SUE is the most complete Tyrannosaurus rex skeleton yet recovered.  Her mounted bones went on display in Stanley Field Hall of The Field Museum on May 17, 2000.[1]  More than 10,000 people visited The Field Museum that day.

In one of the largest private gifts ever to a Chicago museum, the Tyrannosaurus rex SUE was remounted in a more scientifically accurate way and moved upstairs from Stanley Field Hall to the exhibit The Griffin Halls of Evolving Planet, as I wrote about in 2017.  Meanwhile, a touchable cast of the biggest dinosaur yet discovered, Patagotitan mayorum, was installed in Stanley Field Hall, as part of The Field Museum’s 125th anniversary celebrations in 2018, thanks to a $16,500,000 gift from the Kenneth C. Griffin Charitable Trust.  This titanosaur cast, which stretches across 122 feet of Stanley Field Hall, has been dubbed Máximo.  The move of SUE upstairs and the installation of Máximo are part of the Griffin Dinosaur Experience.  Last year, The Field Museum announced the $250,000,000 fundraising campaign “Because Earth. The Campaign for the Field Museum.” 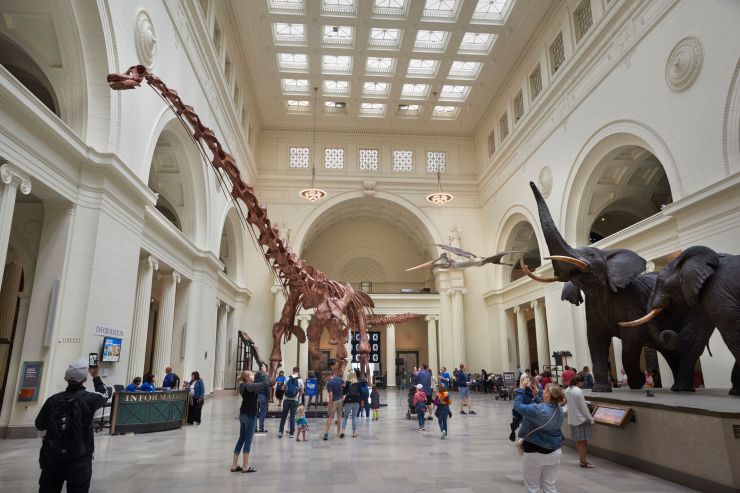 Figure Credit: John Weinstein, The Field Museum Caption: This is Máximo the Titanosaur and Carl Akeley’s African Elephant Group in Stanley Field Hall at The Field Museum of Natural History.

The Field Museum has over 30,000,000 artifacts and specimens.  Over 150 scientists, conservators, and collections staff members work there.